Rasmus Høtoft, CEO Optimization is a term not unheard of among product developers. To optimize designs, both old and new, is an integral part of their work process. Consider a developer wanting to produce a metal bracket. He would preferably want to minimize material costs as well as the bracket’s weight while maintaining the stress under a certain threshold. However, the route to achieving an optimal equilibrium between mass and stress can often be tricky and time-consuming. And the most prevalent outcome, in such cases, is a manageable solution that fulfills the stress criteria, but with a conviction that the mass could have been reduced further. What can help product developers refrain from making compromises of this kind and instead bring the best possible design to fruition? Given the usual limits of working hours and project deadlines, how can developers optimize a number of design concepts before selecting the most optimal one? Computer-aided optimization (CAO) is the answer.

CAO automates design exploration and testing based on mathematical models and computer algorithms, thus substituting the tedious design processes of manual optimization and trial and error. The algorithms adjust and alter design variables in accordance with the product requirements, allowing developers to explore a plethora of optimal designs in less time and pick the one that best meets all of the customer expectations. As CAO provides better and faster design insights than what is humanly possible, developers don’t have to make a trade-off between development time and optimal designs. And yet, in spite of being around for as long as computer-aided design and engineering (CAD and CAE), CAO is underutilized by companies, partly because of the lack of computation power historically. Even today, the high expenses and complexities associated with CAO are a common concern, which restrict it from becoming a mainstay in the product developer’s toolkit. What has been lacking is a powerful CAO tool that addresses the needs of a common product developer. This is why CORTIME was created, promising to be one of the most easy-to-use and cost-effective CAO tools in the market. The CORTIME software can be seamlessly integrated into developers’ existing workflows, while still providing advanced optimization technology.

Created in 2012 as a result of a Ph.D. thesis, Denmark-based CORTIME fulfills the requirement for a much simpler and more efficient way of optimizing CAD designs.

The three crucial components that make up CORTIME include sensitivity analysis to reduce design complexity, the aforementioned design optimization to discover the best design, and robust design to prevent malfunctioning. Sensitivity analysis simplifies complex problem statements by visualizing cause-and-effect relationships and focusing on the most critical parts of the problem. CORTIME Robust Design quantifies the probability of design failure by accounting for controllable as well as uncontrollable factors, thus minimizing future risks.

As the only CAO software that is integrated into the SolidWorks task pane, CORTIME is an all-in-one platform for CAD, CAE, and CAO, which gives product developers a holistic view of the entire design process. CORTIME acts as an add-on to any simulation tool and all that developers have to do is add design variables, define and prioritize objectives, and start the optimization. CORTIME features customizable optimization settings that include the number of iterations, optimization sessions, type of algorithm, and more, based on a developer’s variables and objectives. Further, CORTIME runs automatic optimization round the clock, allowing developers to focus on other assignments and eventually provides extensive data to handpick the best design from.

CORTIME’s automatic design exploration and testing leads to a remarkable increase in product performance and also reduces the development time to a great extent. In addition, analysis tools that help evaluate the optimal design significantly minimize the development costs. To the core, CORTIME is all in favor of better designs in less time and at a lower cost.

The effectiveness of CORTIME’s optimization capabilities can be illustrated by the company’s project for Soler & Palau Ventilation Group, a leading manufacturer and supplier of ventilation equipment with a product line of more than 10,000 models across 90 countries.

The client was in search of a method to improve the airflow in one of their ventilation designs along with enhancing the overall design process. Priding themselves of being able to service the smallest bathroom to the largest building on earth, Soler & Palau were also looking to reduce development time and boost product performance by applying design exploration and data analysis tools. Finding a way to obtain maximum airflow in a ventilation system is a highly complicated process; instead, the client applied CORTIME to one of their designs with a predominant focus on the radius and pitch of the propeller’s blades. 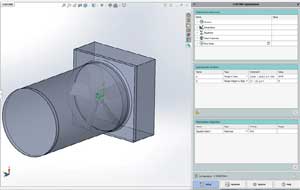 Now, Soler & Palau first defines the vent design variables in the CORTIME task pane, then runs one flow simulation study in SolidWorks to obtain the vent requirements or flow goals, and eventually uses CORTIME to maximize the flow based on these goals. Once the optimization is complete, all the iterations tested by CORTIME are consolidated into an analysis tool to identify the optimal design of the exploration. This saves a great deal of time for the client’s engineers as none of the analysis needs to be performed manually. So far, CORTIME has resulted in a reduction of 3.6 man-hours needed for a simulation project with nine configurations, and Soler & Palau now looks forward to saving 130 hours annually for a similar project. Not only is CORTIME a time-saver but as an integrated part of new designs and re-designs, it is also helping the client create better products. Additionally, CORTIME will help Soler & Palau lower R&D costs, improve product performance, and most importantly, fulfill customer needs faster.

A Step toward Impeccable Workflows

Although CORTIME has resemblances with the SolidWorks Design Study, it provides more insights and better results. Where the Design Study stops running in case of a rebuild error, CORTIME continues to optimize the design and even enables product developers to preemptively detect such errors using the CORTIME Design Checker. Consequently, the software enhances the design accuracy to a greater extent in comparison with the Design Studio’s approach. With absolutely no limitations on the number of design variable that a product developer may want to use, CORTIME outperforms SolidWorks Design Studio in terms of usability as well as optimization technology.

CORTIME continues to evolve, releasing newer software versions with added features and promising to boost product developers’ efficiency by offering them superior optimization technology as well as seamlessly blending into their design processes. The company’s underlying goal is to simplify the automatic optimization process and help R&D engineers become as efficient as possible.