Jordan Kretchmer, Co-Founder and CEO
The industrial robotics market is projected to grow from USD 42.2 billion in 2021 to USD 75.3 billion by 2026 at a CAGR of 12.3 percent. The anticipated shortage of skilled labor in manufacturing industries is one of the major reasons that has paved the way for the growth of robotic automation in industries. – MarketsandMarkets, a global research firm.

Despite these projections, manufacturers are still hesitant to adopt the revolutionary robotic automation technology in an ecosystem replete with (almost 80 percent of the workflow) monotonous and repetitive manual processes. But why?

According to Jordan Kretchmer, an industry pioneer, “The problem is high expenditure for adopting the technology with relatively lower ROI. If a manufacturer were to implement the typical industrial robots to automate their workflow, their initial investment (including program integrator fee, installation cost, and training expenditure) would easily reach upwards of $600K. Often, this investment can take years to recover. Especially when the automated tasks don’t contribute to the net margin, it can be discouraging for manufacturers to take on such an initiative.”

“We wanted to change this perception in the industry that ‘robotic automation is expensive,’” says Kretchmer. Thus, together with Ruddick Lawrence, a technologist in robotics, they laid the foundation for Rapid Robotics and began working on a unique, low-cost robotic automation solution. Their efforts finally culminated in the rapid machine operator (RMO)—a pre-trained intelligent collaborative robot (cobot) powered by AI, cloud, and computer vision.

In a nutshell, Rapid Robotics’ RMO is much like a ‘skilled worker’ that can be put to work from day one without additional training. Since the RMO can work three shifts, its cost to the company is also far lesser than that of a human operator; almost a quarter of the labor cost, to be precise. Built on this simple yet revolutionary subscription-based robotics automation solution approach, Rapid Robotics is empowering countless manufacturers today to thrive and expand. The productivity boost facilitated by the company’s robotics solution is serving as a springboard for manufacturers to scale rapidly and take on more and bigger projects, thus bringing them on par with their international competitors.

Rapid Robotics’ cobot is also enabling its clients to ‘free two birds with one key.’ While low investment cost is a given with the subscription-based model, it also allows clients to address the continuing labor shortage issue in the manufacturing sector. Since Rapid Robotics’ cobots perform all the repetitive tasks (pad printing, labeling , injection molding, etc.) without the need for extra training, the clients not only are able to bridge their labor gap but also promote their existing workers for higher-margin operator tasks. Each of the promoted operators can, in turn, oversee up to a dozen of RMOs at a time, while also focusing on other value-adding tasks. Moreover, owing to the greater available uptime and consistent pace of the cobots, the manufacturing companies can scale and grow at a tremendous pace, and reinvest their savings for further growth opportunities. In fact, there is numerous evidence showcasing that such a productivity spike—due to Rapid Robotics’ RMO support—has translated to higher margins for the manufacturing companies, and hence gain a greater foothold in the industry; a win-win situation for all. “As a result, even the projects that were once outsourced are now being brought back home to the U.S. because of our innovative solution,” mentions Kretchmer, co-founder and CEO of Rapid Robotics.

Enter Rapid Robotics. It did not take long for the company’s technical sales and deployment team to identify the potential use cases. The AI pre-trained cobots (incorporated with all the essential hardware and software) were deployed in a matter of hours and put to work, each performing a dozen machine tasks at a time, and, coupled with that, also adhering to the highest quality standards. Within a week of deployment, the client’s labor shortages were address and cost dropped by 82 percent, which enabled them to reduce their overall production expenditure. The OEM, as a result, reverted its ongoing projects back to the plastics manufacturer. The outcome? Rapid Robotics’ client not only managed to retain their OEM customer but also increased their profit margin significantly.

Such accomplishments and contributions have recently enabled the company to raise $37M. Their third funding round—which is in 12 months—will be used to fund its regional expansions across the U.S. The company will also focus on broadening the reach of its RMOs across the manufacturing industry with the aim of boosting the implementation of robotic automation and encouraging production at home (U.S.). “By equipping our manufacturers with intelligent, accessible and affordable robotics automation solutions, we are ultimately growing the share of manufacturing GDP in the U.S.,” concludes Kretchmer. Description
Rapid Robotics’ mission is to provide manufacturers a robotic solution that can be deployed against simple tasks in hours rather than weeks, and at a fraction of the cost of other automation solutions that require extensive manual programming. The company’s product is a fully integrated intelligent robotic arm work cell, the Rapid Machine Operator (RMO)that is trained to perform tasks out of the box, and learns new tasks via the company’s cloud infrastructure, AI, and computer vision. Rapid’s software provides customers with an intuitive interface that gives them the tools to deploy and redeploy Rapid’s automated work cells on their manufacturing lines without having to be a robotics expert 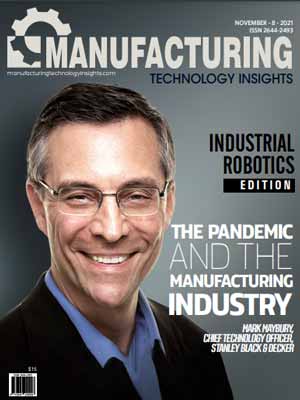