Zirconia: Supercharging Concrete Today with the Tech of Tomorrow

Benjamin Cook, CEO of Zirconia
The steady tap of footsteps, followed by a pause and then a resonating gasp.

It is not uncommon to hear these sounds in succession, as tourists witness the pillars of the Pantheon, the Coliseum, or the Roman aqueducts. These ancient marvels, which have stood the test of time are still intact today, over 2000 years later. But how?

This question has turned to interest as scholars, engineers and architects have begun to ponder, “What are they made of, and how can we re-invent it?”

“Yes, we have done it,” says Benjamin Cook, CEO of Zirconia.

Originally invented in the early 2000s by a Rutgers University professor, CeramycGuard by Zirconia is an anti-corrosion coating that can mitigate/stop concrete corrosion indefinitely. “Our coating solution, CeramycGuard, is an improved version of old Roman geopolymer (alumina-silicate mortar) technology and is built with micro- and nano-scaled ceramic elements making it an ultra-durable anti-corrosion coating system,” says Mr. Cook.

Zirconia’s unique value proposition is that their global-first solution can overcome the inherent limitations of cement and concrete. Both of these materials are vulnerable to corrosion from environmental exposure (carbonation and salting), are chemically weak, have high CO2 cost, and are prone to chemical corrosion. Existing non-ecofriendly technologies such as epoxies, repair concrete by merely sticking temporarily to its surface without chemically bonding with it, making for a poor long-term fix. Since most large infrastructure worldwide is being made of concrete, this problem is at best an exercise in inefficiency, and at worst a disaster waiting to unfold.

By preserving concrete and steel reinforcement, CeramycGuard is resolving all of these concerns. It will chemically bond to the concrete surface and form an ultra-durable composite that stabilizes concrete chemistry and shields the surface from environmental attack. CeramycGuard’s alumina-zirconia-silicate technology chemically bonds to the calcium and silica in concrete and fills pores, cracks, and other irregular areas, infilling even microscopic voids. As an inert ceramic polymer, it is also thermally compatible with all concrete surfaces, and highly resilient against heat, cold, humidity, water, and salt. Further, CeramycGuard is unaffected by wet/dry or freeze/thaw cycles, and does not peel, flake, chalk, or delaminate in any manner. In essence, the solution makes building assets virtually immortal, as most chemical erosion happens from the surface inward.

This affordable geopolymer coating is a proven solution, that has catered to the infrastructure needs of many industry verticals, including agriculture, food production, water infrastructure, and other markets with large built assets. In general construction, Zirconia’s technology is the first coating to be able to preserve concrete indoors and outdoors. As one example, their technology is used as a concrete waterproofing of choice in numerous high-end computer server farm buildings, preserving their concrete which experiences weathering, including wind-driven rains.

CeramycGuard is also ‘biologically impervious’ to microbial life (antimicrobial), thereby improving general hygiene and reducing the threat of bacterial pathogens in the food and water supply. As a result, Zirconia is now part of the global platinum brooding standard for raising broiler chickens without antibiotics and hormones, as it enhances the bio-security of such animal growth facilities. Subsequently, many FDA and USDA-regulated facilities use the solution as floor coating systems as well, to keep food facilities hygienic and cleanable.

Moreover, CeramycGuard is immune to chloride attack and other environmental factors like ocean salts, heat/cold, UV from solar, humidity, and rain. As such, this technology is ideal for use in parking garages, bridges, dams, manufacturing plants, and other general construction. In addition, this technology reduces the effects of Microbial Induced Corrosion (MIC)—a process where bacteria digest hydrogen sulfide gas from sewage to produce sulfuric acid that destroys concrete pipes and other concrete structures in sewage and stormwater infrastructure systems.

These use cases substantiate the immense value propositions of Zirconia’s technology. On the road ahead, they have just signed a $6 M contract to supply coating materials to stop salt corrosion associated with condominium buildings, parking structures, and other related infrastructure in South Florida. The company is also gearing up to preserve UK’s wastewater infrastructure and awaits government approval to work on large concrete freshwater holding tanks. Of note, it recently won the 2022 British Engineering Excellence Award for materials science, as ‘a great development of materials, which is simple to use and meets multiple applications.’ 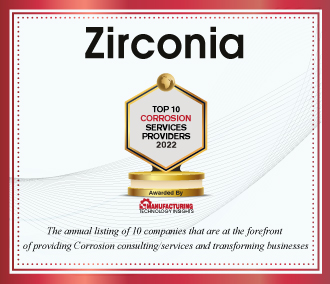 Description
The company offers a global-first solution for ailing concrete instability due to chemical corrosion.