Noxtak: Opening New Windows for the Utilization of Nanomagnetics

Jose Joaquin Machado,CEO
In the nanomaterials space, the research on nanomagnetics is still underrated, but, according to NOXTAK, it’s one of the areas where the future of new technologies resides. To elucidate, 3D nanomagnetics is a new area of research where magnetic nanostructures with unique behavior go beyond the standard two-dimensional (planar) configuration, extending along the whole space and presenting new functionalities.
“This opens fascinating unexplored routes that require a totally different approach for the investigation of new physics focused in the fields instead of particles, development of novel instrumentation and their exploitation in future green, multi-functional, and human-friendly technologies”, says Jose Joaquin Machado, the CEO of NOXTAK.

However, the investigation of 3D nanostructures requires non-conventional techniques and methods that face multiple challenges pertaining to their 3D fabrication, characterization, and modeling. It also requires an understanding of the potential applications available from ferromagnetics behaviors in the nanometric scale.

Many nanoscale effects abound in the field of nanomagnetics, resulting in either the reduced size of the material or the predominant effect of surfaces. One of the more surprising recent incarnations of such novel magnetic behavior is the observation of magnetic properties in nanoscaled materials which are diamagnetic (non-magnetic) in bulk.

“At NOXTAK, our scientific team looked for a non-conventional approach to deal with the electromagnetic disturbances in the non-ionizing radiation emanated from manmade sources, normally known as Electrosmog or Electropollution. After looking at many options, nanomagnetics finally gave us the answer,” Machado claims.

Having found in nanomagnetics this stable, permanent, and scalable solution for the electromagnetic problem, NOXTAK started to develop a material with unique properties to filter and mitigate the EM disturbances and interferences in hyper-connected spaces.

And the rest, as they say, is history.

Being specialists in the study of electromagnetism today, NOXTAK has shown that there are multiple applications that can be derived from the science of nanomagnetics. “It can break the status-quo that has been created due to the existing conception about the properties of a material. As materials, when brought to the nanometric scale, can modify their unique properties for new properties,” mentions Machado.

Nanotechnology is being used today to improve many aspects of modern life in areas like technology manufacturing, medicine, agriculture, environment, and more. Spin Radiation Organizer (SPIRO®), a stable, permanent, and scalable solution for electrosmog (disturbed radiation), is one of the many new applications born from modern nanotechnology.

“To understand the efficiency and importance of the SPIRO® patent in EMF control, we must first understand the origin of the electromagnetic problem, which lies not in the intensity or amplitude of the waves. These elements, which certainly make a difference in the amount of pollution in an environment, are not the basis of the problem; it’s the artificial polarization of elementary particles in electromagnetic waves that are not compatible with biological systems,” mentions Machado.

The SPIRO® technology allows people to coexist with disturbed radiation (artificially polarized). It can be summarized as a nanocomposite material that exhibits stable ferromagnetism in nanoscale.Its natural magnetic anisotropy facilitates the spin polarization of elementary particles in electromagnetic waves thanks to spin orbit interaction and Bloch walls.

Our competitiveness lies in the ability to integrate technical and biological evaluations,have them tested outside the laboratory in real life cases and later validated by third parties

SPIRO® operates as a passive filter for those particles a guide so that they take their own natural order and reduce the chaos that produces the disturbing effect of electromagnetic pollution. Instead of blocking the waves’ trajectory, SPIRO® filters the disturbances by reducing the entropy level without affecting the destination and path of the radiation. In fact, it has been proven that the SPIRO® material can impact microwaves by improving the radiation propagation pattern of telecommunications equipment.

Out of many NOXTAK’s successful collaborations, the success story which stands out is where the company evaluated a dozen cell phones from different manufacturers using the SPIRO® nanomaterial in a telecom laboratory approved by the FCC. “We made a Specific Absorption Rate (SAR ) evaluation and the studies showed a clear reduction of SAR emission peaks. Further, this contributed to less concentrated heat distribution in tissues. We got these beneficial effects without affecting the cell phones’ performance at all,” Machado says.

In another example, NOXTAK helped a law firm that was facing multiple connectivity problems in its building owing to EM disturbances and interferences, as well as noise in the electrical lines related to frequencies, known as Dirty Electricity. Additionally, some employees were presenting common symptoms related to EMF sensitivity, such as sleep disorders, headaches with unknown causes, fatigue, pressure in the chest, among others. NOXTAK implemented their proprietary SPIRO® material in specific locations of the building. The subsequent technical evaluation confirmed a reduction of 87 percent of the interferences and disturbances in the electrical system, a reduction of 90 percent of the noise in telecommunications, and complete elimination of common symptoms of EMF sensitivity in all employees within 60 days.

What differentiates NOXTAK from the other players in the nanomaterial space is its constant thrust toward innovation. Machado informs, “Our competitiveness lies in the ability to integrate technical and biological evaluations, have them tested outside the laboratory in real life cases and later validated by third parties. Less laboratory and more field tests give our clients practical and tangible functionalities of our technology.”

Having carved a unique niche in the industry, NOXTAK is heading toward a bright future. “For years, we have been inviting manufacturers to innovate beyond cosmetic improvements and produce a new type of green and human-friendly technology. We know for sure that we can significantly improve electronics design and functionality by making them Electrosmog-Free, and SPIRO® can be embedded into any electronic device,” states Machado. 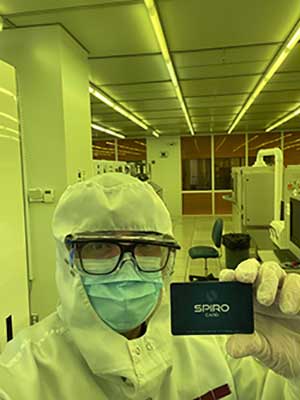 The company has achieved crucial alliances with governments and companies that are already conscious that green or recyclable is not enough - the day has come for Human-Friendly Technologies. Further, they are also performing a series of new studies on water, food preservation, and sports performance. “The results we have gotten so far are amazing and game-changing, and we hope to share more about this as soon as we conclude all the phases of these important tests,” concludes Machado 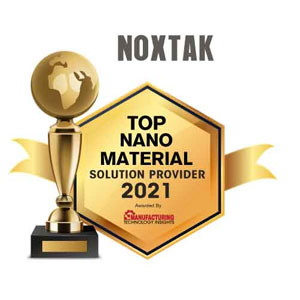 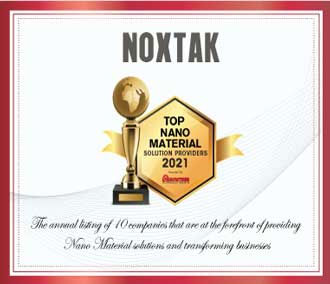 Description
NOXTAK was named in 2019 in the Sustainable Report of CTA (Consumer Technology Association) as one of the three Emerging Disruptive Technologies. Additionally in 2019, the company participated in the SVIF (Silicon Valley Invention Festival) and was awarded a gold medal with special recognition by the Jury in Environmental Protection and also received the International Prize from Genevas House, one of the special prize of the event. Last April 2020, NOXTAK won the Edison Awards in Material Science, subcategory Nanotechnologies. Receiving the Silver Medal of SPIRO Invention. NOXTAK has a environmental lab in Aruba conducting since 2013 a Pilot Project Monitoring Assessment of the island in terms of EMFs Pollution.