Paige Johnson, Founder and CEO
When former first lady of the US Eleanor Roosevelt said, “life is what you make it,” Paige Johnson was not even born. Yet, the founder and CEO of Ten-Nine Technologies’ story is nothing short of the saying personified!

It all begins with a wish she was granted as a little girl. On her eleventh birthday, young Paige received a unique gift from her parents: a microscope through which she observed the miraculous world of the very small. As years passed, her curiosity eventually grew into a desire to make science her life’s pursuit.

Viewing life through this passionate lens, she pursued a master’s degree in chemistry. But after time spent working in both industry and academia, Paige realized a hard-hitting truth. “Though universities do a very good job at imparting education, they are not set up for making change in the public marketplace. I felt the ideas I had in mind could have more impact through entrepreneurship and left the university when I was approached by an angel investor to build a company from scratch,” explains Paige.

Building on her background in material science and nanotechnology, Paige set out to make new materials and test them for application in the big problems of the world. This was how TENIXTM nano additives—to store more energy longer— were designed, created, and produced. Tulsa-based Ten-Nine Tech’s electroactive materials, synthetic procedures, and batteries are the subjects of eight issued patents and 54 national and international patent filings.

Ten-Nine Technologies is on a mission to develop and deliver the world’s longest-lasting and sustainable battery-active materials. “Inside the battery are active materials undergoing chemical reduction and oxidation reactions to either yield or consume electrons, creating electricity flow. Our mission is to make them more energy dense so that they undergo more reactions, making the battery last longer. It is a contrarian approach to batteries that draws on principles of catalysis,” says Paige.

Since its inception, Ten-Nine has closely followed its foundational principles. First, Paige purposed to work only in the “friendly” portions of the periodic table, believing that there is so much interesting chemistry to investigate in the friendly parts of the periodic table that there is no need to work with highly toxic systems, heavy metals, or rare elements to achieve goals. Starting with substances that offer low toxicity and abundant material supply would also enable greater focus on adjusting their surface chemistry to maximize electroactivity.

Too often, scientific research is focused on creating exotic and rare materials with complicated synthesis techniques that are best suited for scientific publication. For making real change in the world, Paige believed that the methodology should strive for simplicity and practicality in the synthesis and manufacturing of materials, using processes that can scale rapidly and cost-effectively.

Inside the battery are active materials undergoing chemical reduction and oxidation reactions to either yield or consume electrons, creating electricity flow. Our mission is to make them more energy-dense so that they undergo more reactions, making the battery last longer. It is a contrarian approach to batteries that draws on principles of catalysis

These foundational principles have also enabled the Ten- Nine team to set up the company in a green and sustainable fashion and to develop the world’s first carbon-neutral production process for a battery-active material.

Unlike most battery startup companies or researchers that rely on increasing the voltage of active materials for battery innovation, Ten-Nine is focused on increasing the capacity of active material by working with surface chemistry at the nanoscale to increase the electron reactions and thereby increase the amperage of the battery. The unique methodology also does away with the drawbacks of ordinary battery cathode materials. In the majority of the battery cathode materials, an average of only five percent of the atoms participates in the reaction, while the rest are for structural support. The solution to this problem is simply to involve more atoms in the reaction by increasing the surface area. This change in methodology also eliminated barriers to manufacturing since it did not require changing crystal structures.

Another unique factor of the innovative material formulated by Ten-Nine is the high energy density that is even useful in the primary or singleuse battery space. Single-use batteries already last two to three times longer than rechargeables, so all the innovations directed towards the rechargeable battery space have no application in the single-use battery space. And yet singleuse batteries are a huge contributor of carbon, and innovation in that space addresses climate change as well.

Ten-Nine plans to address both single-use and rechargeable batteries because all batteries impact the climate and contribute to climate change. “As 75% of batteries sold are still single use cells, if they were made to last twice as long, that would be equivalent to removing 1.3 million internal combustion engine cars from the road every year,” elaborates Paige.

With a ground-breaking battery material in hand, Ten-Nine has huge hopes for the future. They have recently achieved the first product flow from their pilot plan of 12-ton annual capacity as they move from R&D into largescale nanomanufacturing, making them one of the largest producers of nanomaterials in the world. Ten-Nine has a two-tier business plan, starting with single-use batteries and then transitioning to EV and rechargeable batteries. The differentiating factor of TENIXTM nano additives is their ability to be in both types of batteries. “We look forward to licensing the technology as manufacturing the batteries themselves is not part of our business plan. Once the single-use battery application is mature, we hope to transition that to an existing manufacturer and start focusing on the rechargeable space to get to EVs,” concludes Paige 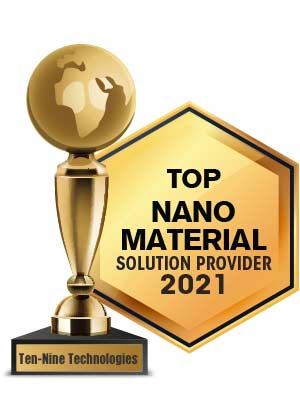 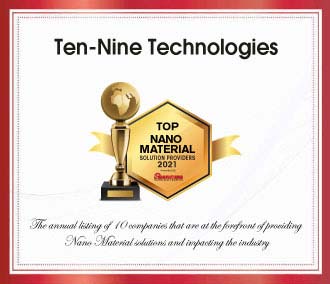 Description
Ten-Nine Technologies is dedicated to breakthroughs in energy storage technology for the energy and chemical industries across a broad range of applications.